Have you ever visited a Nuclear Explosion Map website to see what the visual impact of a nuke would do to your closest city?

It’s like watching a car wreck, you don’t really want to see it, but can’t quite look away.

Here’s an excellent video of The Canadian Prepper using this mapping software:

In today’s modern world, the nuclear threat is alive and well. In some ways, it’s even scarier than the cold war days…

At least in the cold war days, the massive game of chicken was offset by horrors of mutual destruction.

Nowadays, a nuke in the hands of terrorists makes the mutual standoff much less likely. Suicide bombers don’t care about mutual destruction…to them, that’s the point.

Or how about a rogue nation like North Korea which continues to progress its nuclear capabilities and reach.

It’s only a matter of time for this highly unstable nation to be capable of reach the western coast of the mainland U.S.

What Are A Nuclear-Armed Terrorists Primary Targets?

The answer is pure speculation and discussion-worthy all on its own…however we can make a few reasonable guesses.

I’d guess that a terrorist with a nuke would want to get the best possible return on investment…deaths.

More deaths = more terror (and terrorists are in the business of terrorizing).

That makes me think that they would attack locations that have high population density. Major cities or large events.  Places where they will get a high death count.

The other locations I would suspect could be a target are any U.S. military of U.S. government facilities (white house, federal buildings, air-force bases, etc.).

Here’s a website that gives you maps of the state-by-state nuclear threats. It’s a bit older (2002), but it still provides relevant visual nuclear threat data.

What’s The Best Way To Survive A Nuclear Attack?

The best way to survive a nuclear attack is to avoid one in the first place. Don’t live or near in a major city.

Hopefully, you do not…but what about your extended family? Do you have an Uncle in New York? A Sister in Denver? A Grandparent in San Francisco?

In my opinion, living near the most densely populated cities carries a lot of risks. 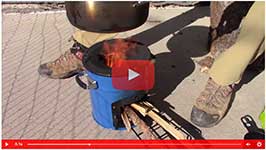